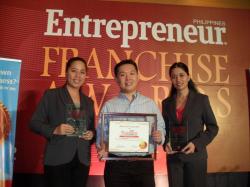 For its consistently remarkable performance and positive impact on the lives of Filipinos nationwide, The Generics Pharmacy (TGP) recently received two prestigious citations from the Philippines’ premier business publication, Entrepreneur magazine, during the latter’s Franchise Awards 2012.

In the annual event, which gives due recognition to some of the country’s top franchise brands, TGP received the Special Citation for Responsible Competitiveness. The award acknowledges its strong franchising strategies that contribute to the successful distribution of valuable products and services to Filipinos who need them most. TGP continues to preach the quality, safety and efficacy of generic medicines over their more expensive branded counterparts.

Entrepreneur magazine also recognized TGP as the Fastest Growing franchise company in the country. According to the publication, TGP aims to grow its present number of around 1,400 stores to 2,000 by 2015, further solidifying its status as the country’s largest drugstore chain.