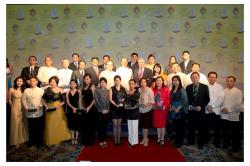 Manila – It was a night of excitement and entertainment as the Philippine franchising sector feted the best of the best in Philippine franchising during the 10th Franchise Excellence Awards (FEA) at the Crowne Plaza Galleria Manila, Wednesday. Even as the world goes through one of its trying moments, the said event gave an eloquent reminder that a culture of excellence is still the best antidote to the ill effects of the global financial crisis. Topping the tilt were Bench and Jollibee Foods Corporation for clinching the Global Filipino Franchise Concept Award for Retail and Food category respectively. During his acceptance speech, Jollibee President, Mr. Ernesto Tanmantiong underscored the importance of excellence in the ascendance of Jollibee towards becoming a truly global Filipino brand. And as part of PFA’s efforts to promote franchising as a tool for enterprise development, economic advancement and nation-building, the said event highlighted the contribution of the franchisees in the sector, specifically in countryside development. The top regional franchisees were: o Ms. Cecilia Pua Phee of Region I – Max’s Restaurant o Mr. Jay Ramos, Jr. of Region III – Julie’s Bakeshop o Ms. Lucille Cuasay of NCR – Julie’s Bakeshop o Ms. Mr. Danny Tan of Region VII – Shakey’s o And Mr. Joseph Sing Chua Kao of Region XII – Waffle Time From among the top honorees, Ms. Pua Phee, franchisee of Max’s Restaurant and Ms. Cuasay, Franchisee of Julie’s Bakeshop, were named the National Franchisee for the 10th FEA. The other winners include: • Most Promising Filipino Franchise o Teriyaki Boy – Food Category o The Generics Pharmacy – Retail Category • Marketing Campaign of the Year Award o 7-Eleven – Retail: Food Category o Seaoil Philippines – Retail: Non-food Category • Best International Master Franchise of the Year o Body Shop – Retail Category • Outstanding Filipino Franchise of the Year o Waffle Time – Food: Kiosk Category o Red Ribbon Bakeshop (Hall of Fame) – Food: Bakeshop Category o Shakey’s Pizza (Hall of Fame) – Food: Restaurant Category For winning the Outstanding Filipino Franchise award twice, Red Ribbon and Shakey’s Pizza were elevated to the Hall of Fame. All FEA winners are now among the elite few, which are considered benchmarks in domestic franchise sector. But all the winners aver that more than anything, the award only made them realize that excellence is the sure way to success and to global competitiveness. To spice up the evening, alluring singing sensation and Bench model Karylle gave a sultry song number while pop-rock violinist Jay Cayuca wowed the crowd with his rousing routine. Other honorees for the evening were BPI Family Savings Bank, which was given a special citation for Franchise-Friendly Bank; UK Trade and Investment-Manila, which received the Chairman’s Award and – for the first time in FEA history – Mr. Jose T. Pardo, who was cited for his pioneering and sustaining role in Philippine franchising also received the Chairman’s Award. Intellectual Property Office Director General Adrian Cristobal, was the night’s guest-of-honor. Other special guests include PCCI President Ed Lacson and PCCI Honorary Chairman Atty. Mike Varela. President Arroyo also sent a message of congratulations to the PFA citing the winners of the awards for marching on despite the global challenges. She also cited the association for continuously raising the bar in franchising and for relentlessly creating business opportunities, which is needed in these challenging times. The 10th FEA, presented in cooperation with the Department of Trade and Industry (DTI), the Philippine Chamber of Commerce and Industry (PCCI) and the Philippine Retailers Association (PRA), was made possible through the support of Megaworld Corp. and other partners which include Ayala Malls, Jollibee Foods Corp., Red Ribbon Bakeshop Inc., Philippine Seven Corp (7-Eleven) and Max’s Restaurant.