Benjamin Liuson aces the Entrepreneur of the Year Award from APEA 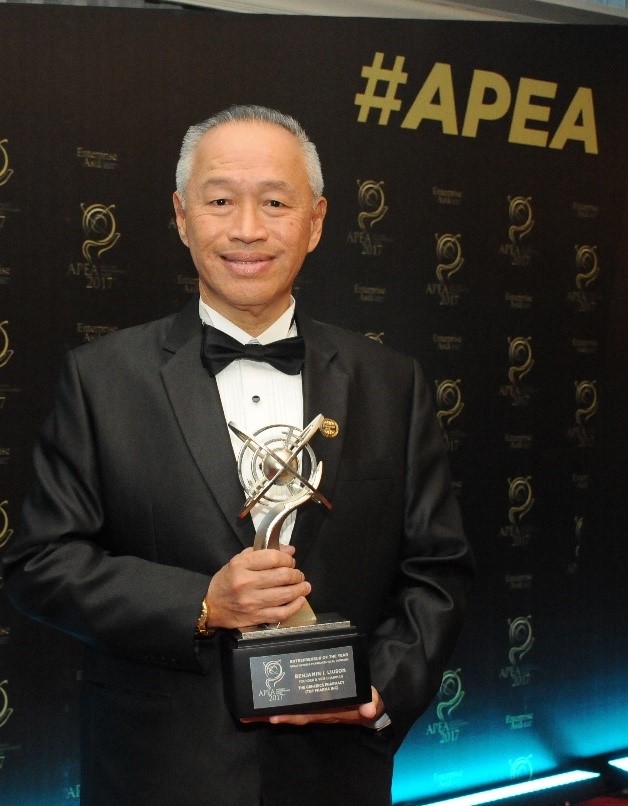 Benjamin Liuson aces the Entrepreneur of the Year Award from APEA

In a grand thanksgiving event attended by its business partners, TGP – The Generics Pharmacy celebrated an unprecedented milestone of having 2000 strong outlets in the country in just ten years in pharmaceutical retail. To cap that celebration and seemingly with an impeccable timing, Benjamin Liuson, Founder and Vice Chairman was conferred ENTREPRENEUR of the YEAR Award from Enterprise Asia.  It is Asia Pacific‘s most prestigious non-governmental organization for entrepreneurship excellence, exemplary entrepreneurial achievements, continuous innovation and sustainable leadership, with offices based in Singapore.

Recognized for his demonstrated outstanding performance and development of a business concept that triumphed despite major odds, Benjamin Liuson is a visionary and a maverick thinker and doer who contributed to the upliftment of the health and well-being of many Filipinos. What makes him a stand out though is not only the push and use of quality and affordable generic drugs but more importantly, his personal advocacy of ensuring the spiritual nourishment of the people thru a sustained distribution of free copies of the Bible for the past years. TGP, now a household name, and truly ingrained in the hearts and minds of the vast majority of the population is not just about business and profits. It is in itself a corporate social responsibility that continues to develop and empower entrepreneurs, provide thousands of jobs and livelihood and commits to serve the communities where it is present.